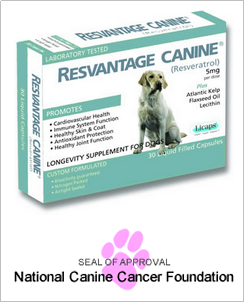 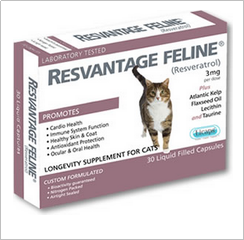 The National Canine Cancer Foundation has awarded RESVANTAGE CANINE their Pink Paw Seal of Approval for a "product that helps to advance the holistic health of our pets and helping fight canine cancer." This designation is granted only to companies who have met rigorous quality standards and other criteria established by their Scientific Advisory Board.

Resvantage is an all natural longevity supplement providing powerful support for your pet's health needs. Improve the quality of your pet's life and keep your pet from acting old before his or her time! Just as in humans, nutritional supplements may be the best tool for maintaining health and preventing disease.

Used to supplement your pet’s overall diet, Resvantage Canine and Resvantage Feline contains resveratrol blended together with a unique combination of nutrients that work synergistically to help him or her reach full potential and diminish the many symptoms associated with aging.

Resveratrol is one of a group of antioxidant compounds called polyphenols found in numerous plants and in red wine that has been reported to have anti-inflammatory as well as anti-cancer properties. Research has proven that resveratrol is the first compound to consistently prolong the life of several very different animal groups.

A Precise Synergistic Blend Custom Formulated from Natural Sources that include Omega 3 fatty acids, cell protecting antioxidants, amino acids, trace minerals and vitamins all working together, to address a wide range of canine and feline health needs and promote:

Oxygen is the enemy of Resveratrol and many other natural plant compounds. In order to protect the resveratrol content in each capsule from degrading and to insure maximum potency, Resvantage Canine & Resvantage Feline are encapsulated by the Capsugel® division of Pfizer in an oxygen-free, nitrogen-rich environment utilizing their patented Licaps® process. And the liquid filled capsules are opaque, further protecting the resveratrol from losses due to exposure to light.

A Nutritional Supplement manufactured to strict pharmaceutical standards insures that your pet is getting the highest quality and safest supplement available on the market today.

What is resveratrol and how does it prevent cancer?

Resveratrol is a type of polyphenol called a phytoalexin, a class of compounds produced as part of a plant's defense system against disease. It is produced in the plant in response to an invading fungus, stress, injury, infection, or ultraviolet irradiation. Resveratrol is present in 70 different plant varieties including: grapes, pomegranates, raspberries, peanuts, and other plants.

Resveratrol has been shown to reduce tumor incidence in animals by affecting one or more stages of cancer development. It has been shown to inhibit growth of many types of cancer cells in culture. Evidence also exists that it can reduce inflammation. It also reduces activation of NF kappa B, a protein produced by the body's immune system when it is under attack. This protein affects cancer cell growth and metastasis. Resveratrol is also an antioxidant.

What have Resveratrol studies found?

The cell and animal studies of Resveratrol have examined effects in several cancers, including leukemia, skin, breast, and prostate cancers. Scientists are studying resveratrol to learn more about its cancer preventive activities. Recent evidence from animal studies suggests this anti-inflammatory compound may be an effective chemopreventive agent in three stages of the cancer process: Initiation, promotion, and progression.

You can purchase the products shown on this website at our Sedona pet supply store or if you live out of the area call our store at 928.567.5555 during normal business hours to arrange your purchase to be shipped to your home!

Come on in and see what everyone is talking about!

Golden Bone Pet Products was voted Best Pet Shop in Sedona by Market Surveys of America for 5 years in a row!

Thank you to all our loyal customers and friends for your support, your trust, confidence and your patronage! Thank you for making it possible for us to stay and serve the pets of our community! 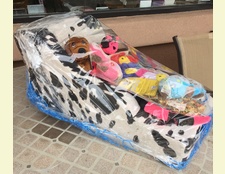 Visit us on Facebook for frequent updates on new products, specials, sales and more!

Did you know you can get pet tags engraved, while you wait? 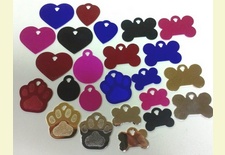 Watch for the following pet products to be "Coming Soon" to our online store!